Eight years ago I met Aminata.  She was among the first refugee people I met.  She used to bring her daughters into the English class at the resettlement agency and it was sometimes hard for her to concentrate on learning English because she was trying hard also to care for her daughters.  One of her daughters is a young adult working a lot to help support their family.  The second daughter is in High School.  Aminata speaks French and is often caught on the telephone trying to work things out for her family that she left behind in the Congo during her escape from all the fighting.

Today, I took Aminata to one of her regular doctors visits.  She has diabetes and does not really understand how to manage her diet and lifestyle in order to keep her sugar levels low.  There are many diabetics in the world that struggle with this even though they feel they are dieting and exercising the way they are supposed to their bodies do not always cooperate. It can be a frustrating and debilitating illness.  It is especially frustrating to Aminata since she has to manage getting to and from all the regular doctor visits and try to understand her English speaking doctors when they change her diet, exercise plan, insulin levels and variety of medications.  Aminata does not speak English well, but she has been improving over the years that she has been taking English classes.  She wishes that the English classes were more days during the week and longer hours during the day.

Aminata shared with me her story.  I knew bits and pieces of it but today I learned more.  She is okay with me sharing it with you.

Aminata had just had her youngest baby girl when the fighting in the Congo got really bad for her family.  One of her other girls was with her and her new baby the day she remembers the fighting which caused her to have to flee.  Aminata had five additional children (3 boys and 2 more girls) who were with her parents at the time she had to flee.  Aminata and her two youngest girls had to suddenly run when the “bad” people came into her home.  They shot her in the leg with a gun while she was holding her little baby girl and her six year old daughter was watching.  Aminata told her six year old to run.  Aminata saw the “bad” men tie up a person to a car, drag them and shoot at them.  “People in America do not really understand the trauma and the type of things that many refugee children and adults see,” she said.  Aminata suffers with stress, depression and PTSD symptoms.  Aminata and her two daughters were fortunate to be able to run to safety to a refugee camp.

Her parents and remaining children lived in a big house that her dad was renting in the Congo.  The day the fighting got bad, her parents house was attacked.  The walls were knocked down and then the house was set on fire.  Her father was killed.  Her mother and children ran.  During the years her mother tried to escape with Aminata’s children her mother was severely beaten by the “bad” men which has left one side of her body paralyzed.  (The video attached is of Aminata’s mom.).

Aminata could not find her mother or children for over ten years.  When she finally located them, she was in the US and got to talk to her mother on Facetime on her cell phone.  It was an expensive, happy call.  Aminata finally saw her children and mother through the cell phone.  Her children hardly remembered who she was.  Aminata also met her grandchildren. (Pictures here are of one of her daughters and grandchildren in Mali.) 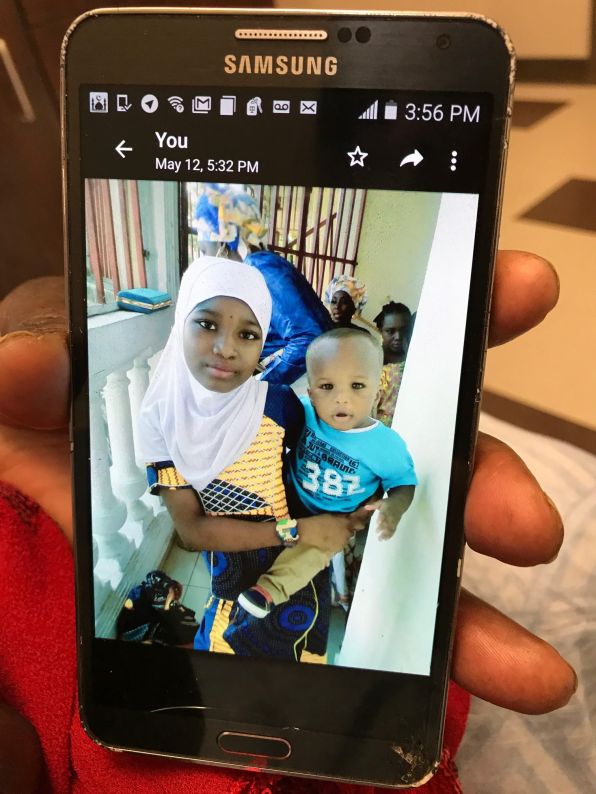 Aminata is very happy to be in America but life in America is hard for them. The diabetes has caused her feet a lot of problems.  Here lately, she is having numbness in her fingers.  Asha’s Refuge is connecting Aminata to a free diabetic class so that perhaps she can better understand her illness and how to manage it.  (She truly needs the class to be taught in French.) Aminata tries to exercise at her apartment but where she lives she feels it is too dangerous to go outside and walk too far.  On more than one occasion she has been made fun of for her accent and inability to speak fluent English, bullied and pushed to the ground by American teen boys as she was trying to walk.  Aminata goes to Asha’s Refuge weekly and walks up and down the halls to have a place to safely exercise. Paying for utilities each month and paying for the remaining balances on all her doctor bills is one of the hardest things for Aminata and her daughters to keep up with.  Her oldest daughter would love to be able to go to college, but she feels like it is more important right now for her to work and help support her family.

Aminata really misses her family who are still in a refugee camp in Mali, Africa.  She has found a way to collect clothing for her family and friends in Africa which is very much needed. She also figured out how to send what she collects back to them in a container for $200.  Aminata has rallied her community to donate their used but good clothes, shoes and even non-perishable foods to ship back to Africa to help them.  It takes them a while to fill one of the blue barrels they ship it in, but she does not mind it sitting in her small living room floor until her community neighbors in the US can help her fill it.  She also gets help from her community to collect the money needed to send the big blue barrel off in a shipment container.

Aminata is extremely thankful to Asha’s Refuge and especially loves her English teacher Mrs. Mary Lou.  She said that Mrs. Mary Lou is the only one that really understands her in this whole wide world.  Aminata has also thanked Deborah and me (Jamie) for the heart to build Asha’s Refuge to help her and other refugees like her.